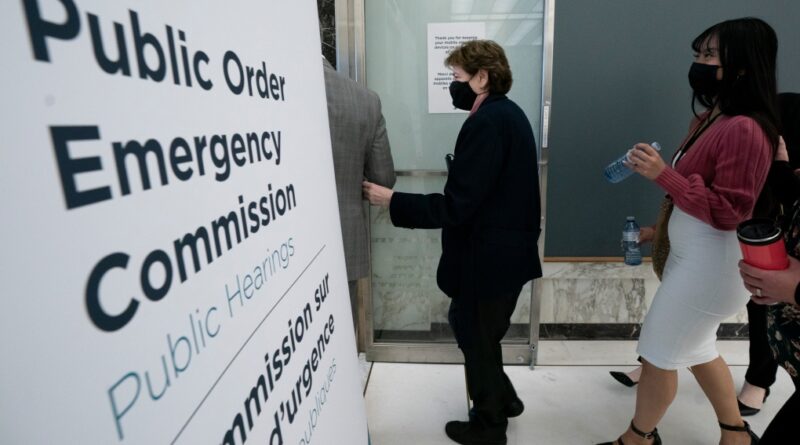 The first round of witness testimony as part of the Public Order Emergency Commission’s inquiry into the federal government’s use of the Emergencies Act to end the ‘Freedom Convoy’ protests took place on Oct. 14.

The day’s hearings focused on the lived and largely traumatic experience of downtown Ottawa residents, the concerns business groups had in their dealings with the city and police, as well as the perspectives from local councillors whose wards were occupied by protesters and transport trucks last winter. After providing their initial testimony, witnesses were then cross-examined.

Here are some key quotes from the witnesses who appeared.

The impact on my physical well-being is quite extensive. I, certainly during the experience, had difficulty sleeping. I had an effect on my lungs and my throat because of the fumes and other smells. And I also have long-term effects… Loss of hearing, loss of balance, some vertigo, triggered by the sound of any horn now… and a physical trigger when I get a smell of gas… I had also had a phantom horn blowing as an experience for a number of weeks after… I felt trapped and helpless,” testified legally-blind downtown Ottawa resident Victoria De La Ronde.

“It was unpleasant to say the least to exit my home… And when I did, oftentimes I was harassed for wearing a mask… And I think what was one of the worst things was whenever I chose not to engage with the individuals that were occupying my neighborhood, they would blast their horns at me with a smile on their faces. And then they would cheer in unison and almost take joy in my flinching, in my recoiling from the noise that I had been essentially experiencing nonstop for the entire duration of the events that occurred… The snow was often colored yellow or brown due to the public urination and defecation that took place gratuitously… I just remember feeling like it was such a surreal sight… And that feeling of chaos and rule-breaking and law-breaking gradually increased as things progressed,” said downtown Ottawa resident Zexi Li, who is a lead plaintiff in a class-action lawsuit against convoy organizers.

“In the beginning it was, you know, they were selling a lot of stuff, they were selling gas tanks and they were selling rope and you know, all the type of things that I think you would buy if you’re camping out… Protesters had been putting up posters throughout the store that looked like public health posters, but saying things like ‘masks are stupid’ or ‘masks aren’t needed’… The most terrifying call I had was on the last, the third weekend, where the manager was talking to me and he said: ‘You know, Natalie, I don’t know if this is something but I feel like I should tell you, we sold out of knives and bear spray this weekend.’ And that is something that I reported immediately,” said Nathalie Carrier, the executive director of ZAC Quartier Vanier Business Improvement Association, sharing anecdotes from her conversations with staff at a Canadian Tire located near the Coventry Road encampment that became a main gathering zone for truckers east of downtown.

“Being on Sparks Street for almost a decade now, I’ve witnessed thousands activations on Parliament Hill. I mean, you could put 15,000 people on that hill, and you wouldn’t even have a clue if you’re a block away. The difference was we had… blocking roads and access to businesses, and terrorizing residents with you know, first horns and then just the revving of engines and you know, silly little mischievous type stuff… We can talk about decibels and things like that and the occasional air horn but if you ever just sit there listening and feeling the rumble of a dozen diesel engines, it’s a different feeling. It can roll through your body in a way that’s unsettling. And again for our area to be subjected to that, was awful,” Kevin McHale, the executive director of the Sparks Street Business Improvement Association, told reporters in a scrum following his testimony.

“There was fear. Certainly people that first weekend who were reporting back to me and calling me and emailing me were fearful, but they were braced for it. And, you know, had been told that it would end on Monday and waited for that. So after Monday, when it didn’t end, it just became in the words of people who were calling me and talking to me, they felt that they were under a great deal of threat. Seniors reporting that they had trouble going out, they felt threatened when they went into a grocery store, residents not being able to leave their apartments. I had to help one couple leave the downtown with a police escort on the first weekend. There was a pride flag in their window, their apartment was targeted, somebody had defecated on the back step. And then later that night, a pickup truck with angry people in it came back and were harassing and yelling at them… It was, you know, a general sense of fear, terror, and dismay that they felt abandoned by their city and by their police,” said Ottawa City Councilor and mayoral candidate Catherine McKenney, who represents Somerset Ward, which encompasses most of the Centretown neighbourhood and the area around Parliament Hill.

“There were a number of incidents where bus detours had to be conducted and we had communications with residents who, for example, waited for a Para Transpo—Para Transpo is the accessible bus of Ottawa—couldn’t get to their cancer treatment, because the bus couldn’t get there and they were not mobile… We were getting a lot of complaints from business operators and residents in the area of the smells, and the intoxication of that those smells… The compounding effect of noise, smells, the physical presence, the inability for folks to in some areas walk on the sidewalk, walk safely at a crosswalk,” said Ottawa City Councilor Mathieu Fleury, who represents the Rideau-Vanier Ward, which includes parts of the protest zone and is where the Rideau Centre is located, which was shuttered for an extended period of time due to the convoy.